In a previous blog article we have demonstrated that by providing a binary with an input of a specific length, its EIP register can be made to point to a specific address. Up until now, we have employed invalid addresses consisting of ASCII-byte representations of the letters A or B. How about using a valid address?

The only difference between this program and the previous one is an unused function helper().

Dead code refers to unused code within a program, which may occur due to a developer’s oversight of failing to remove unused functions.

As a reminder, here are the compilation commands that you may find helpful:

One of the first things we can do with the EIP control is reuse the binary’s dead code.

In other words, we will direct the EIP to the executeable function helper().

To accomplish this, we require the address of this function. Let’s execute the newly created binary in gdb and examine the function’s address using the p helper command:

If you do not have the source code of the target program and the binary is not stripped, you can use gdb’s info functions command to locate the existing functions: 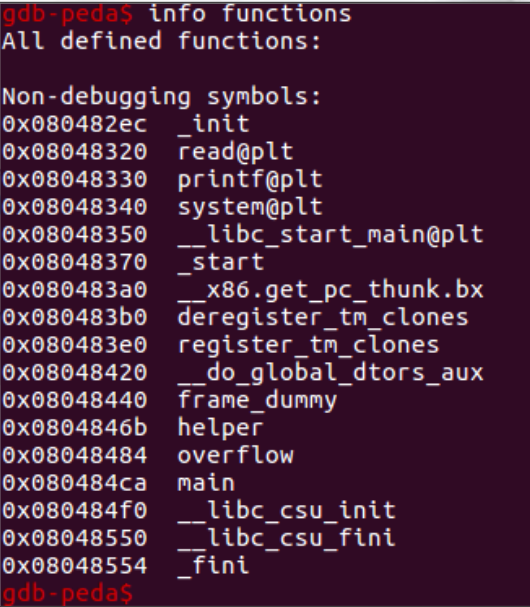 Even without the source code, it is possible to locate and decompile the helper function: 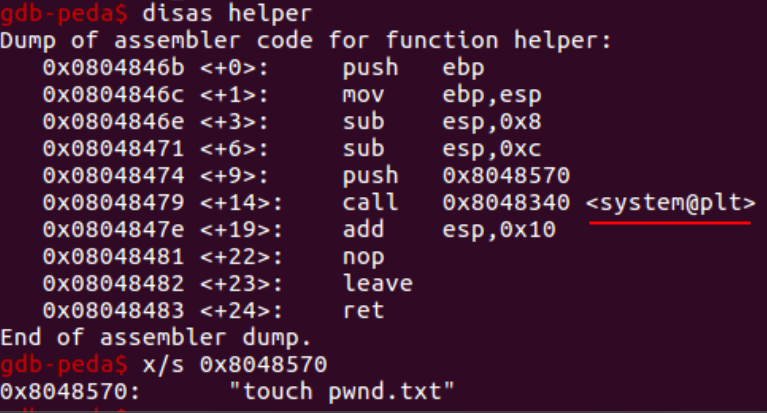 The disassembly dump reveals the call to system() as well as the push of an address onto the stack immediately prior to it.

It is obvious that whatever is pushed onto the stack immediately before a function call is its argument.

By examining the string located at that address, we can now determine that it is an argument to the system() function, which creates a file.

Now we must create the buffer that will be used to pass the address of the helper() function to the program, rather than ASCII characters.

We must remember the following:

Given that a hexadecimal address consists of four bytes, we are obviously missing one digit; the trailing zero was omitted. The address’s 8-byte representation is 0x0804846b.

To conform to the specifications of the memory storage format, we must send them to the buffer in reverse order: 6b 84 04 08

Let’s replace BBBB with the address of the helper() function:

Now, let’s run the executable within gdb and feed the input to it. We can observe that a new process was created:

In accordance with the function’s intent, the helper() function was executed and a new file was generated.

It is obvious that not every binary will contain a function that can be called to perform a useful action.

Now, let’s attempt to exploit the buffer overflow by adding the shellcode.

Shellcode is a set of instructions that is used to execute certain actions within the program. As we are most often interested in getting a shell - it’s called shellcode.

If you disassemble a single executable, you will discover that it is composed of numerous bytes.

Each byte corresponds to a specific instruction (processor operation).

If you direct the current execution flow (EIP register) into an area of memory that has execute permission (for instance, because it is an executable section), the program will attempt to execute the bytes that reside there, regardless of whether they are intended to be data or instructions.

You can think of shellcode as a compiled assembly program in the form of raw machine code.

As there are constraints, writing shellcode will be covered in a one of the subsequent blog post. Additionally, it is impossible to input any assembly bytes into memory. For instance, there are certain bytes that could prevent an exploit. Mastering shellcoding also requires the ability to use particular characters while avoiding others.

For the time being, we can generate our own shellcode without knowing how its internals work by using msfvenom, which is a part of the metasploit framework.

The final step is to respond to the following question. How is shellcode introduced into the program?

As a large amount of data overflows the buffer, it becomes part of the application’s memory. Once the buffer is delivered to the application, it will be possible to locate the shellcode in memory, so it can be shipped there.

In addition, there is the issue of bad characters. Since a buffer overflow is typically caused by an insecure copy/read or similar operation, you should understand how such functions handle user input.

If you ever attempt to decompile a function like strcpy(), you will notice that it scans the user’s string and compares the byte representation of each character to zero (0x00).

Once a null byte is encountered, the copying process ceases because the end of the string has been reached.

Additionally, if you examine the C/C++ strings at the byte level, you will notice that each one concludes with a 0x00 byte. You may also encounter the term “null-terminated string”, which refers to strings in the C style that end with a zero.

Since we wish to insert a shellcode into the exploit buffer, we must avoid including any null bytes within it. This time, it will be generated automatically by adding a single parameter to the msfvenom function.

In addition to the null byte, different functions and programs may also contain other undesirable characters.

Even if this is not the case currently, be vigilant for future attempts to exploit you.

Let’s generate shellcode so that it can be inserted into the exploit buffer. We will use a shellcode in reverse. A netcat listener is required to establish a reverse shell connection to it. -b specifies the characters that should not be included in the shellcode (bad characters).

Now you can paste the result buffer into the exploit.

We can also instruct msfvenom to store the generated payload in a file for convenience, rather than displaying it on the terminal.

The final step is to determine the address of the shellcode at the time of the crash. Let’s quickly debug the program using the first payload (so EIP is 0x42424242).

We inspect 200 bytes beginning at the current esp, 0x230. This is the beginning address of the program buffer. Additionally, we can see where the AAAAAs begin, which is the following address: 0xbfffed70 + 0x8

Hardcoding an address in an exploit is considered a bad practice and often results in poor reliability. However, as this is a basic exploit, we do not need to care about this right now.

The shellcode begins at address 0xbfffed78. As even the environment variable changes may shift the stack by a few bytes, let’s increase the stack’s dependability by inserting a NOP slide before the shellcode.

NOP is a No-Operation instruction (opcode 0x90) and does nothing. Its original purpose was to help with measuring processor performance by performing just an empty cycle.

NOPs can be added to the beginning of the shellcode.

As NOPs are empty operations, if the execution flow is shifted to a long sequence of NOPs (referred to as a NOP slide), the program will execute them en route to the shellcode that follows them. It does not matter whether the execution flow is moved to the beginning or middle of a NOP slide, as long as the shellcode is at its end, it will be executed.

The full exploit can be seen below:

Executing the program within gdb shows that the exploit worked!

In addition, the reverse shell is received. Let’s also determine whether the exploit works outside of gdb.

Depending on your OS configuration, this might end up unattractive.

This is a common occurrence in exploit development, and you should be ready to deal with it.

Outside of gdb, the given shellcode address is apparently invalid. This is likely the result of a different environment configuration outside of gdb.

Using core dump, it is possible to examine what happened:

In this instance, the stack was altered. Let’s modify the exploit so that it corresponds to the crash address outside of gdb. The beginning of the NOP-slide is located at 0xbfffedc0 + 0x8. Change the address to 0xbfffedc8 and run the exploit again.

After making the adjustment and rerunning the application, we observe that the execution has stalled, but there is no segfault.

The netcat listener indicates the reception of the reverse shell:

As mentioned previously, this is a simple exploit, and its low reliability was demonstrated even when executed outside of a debugger.

When evaluating the severity of an exploit, reliability is one of the most crucial factors. The greater its versatility, the more operating systems it can run on.

In the following blog posts, we will discover how to improve the dependability of your exploits and how to circumvent common anti-exploit mechanisms.