Why is the Recycle Bin important for DFIR?

Let’s assume you are investigating a machine where you suspect that a malicious PDF file has been opened. You are not able to find that file anywhere on the file system. It may exist within the Recycle Bin.

Where is the Recycle Bin folder?

You will typically find the Recycle Bin on the Desktop of your computer. However, that is a shortcut to a hidden location.

Within a drive, here C:, the folder viewing options have been modified to display hidden items.

The contents of the Recycle Bin can be found within a hidden directory $Recycle.Bin.

Within this directory, there is a dedicated folder for every user; where the folder name is the Security Identifier for a user. A Security Identifier (SID) is a unique value to identify a user, group or system account on a Windows computer. SIDs typically start with S-. Every value within the hyphens (-) has a special meaning.

Within Command Prompt, you can use dir command to view the content of this folder. /a switch is used to display hidden contents, as the entire C:\$Recycle.Bin folder is a hidden one. From the following screenshot, you can find the two SIDs seen in the previous screenshot, along with the SID of the currently logged in user (underlined in red). The Recycle Bin of the currently logged in user had the name Recycle Bin in the GUI.

Now we know where the Recycle Bin for the currently logged in user exists on the file system.

Now let us delete some files and see how they exist on the Recycle Bin. Currently the bin is empty.

Two files stars.png and tent.png have been deleted on 24th May 2022 at 06:00 hours and 05:59 hours respectively. For each deleted file, you can view the deletion timestamp (relevant to the time zone the device is operating in), the absolute path (full path) of the file, the file size & type and the latest time at which it was modified. It appears that both files had existed on the Desktop.

Note how the Recycle Bin folder of the current user has its modification time updated to reflect the addition of a file to the bin. Here stars.png was deleted last at 06:00 hours and added to the bin.

On the current machine, the Recycle Bin displays the deleted files stars.png and tent.png. Typically, a forensic investigator would copy the contents of the Recycle Bin to another machine for analysis. When the contents of the bin are copied and viewed on another computer, the contents would appear as seen in the following screenshot. You can see that there are four PNG files, the names of two files start with $I and the names of two files start with $R. There is also a desktop.ini file. Whenever a file is deleted, two files are created $I and $R with the same extension as the deleted file. The $R file holds the actual file content. The $I file holds metadata about the deletion activity (deletion timestamp, absolute path of the file, file name, file size) that was initially observed in the GUI.

Even without copying the contents of the Recycle Bin to another computer, you can view the bunch of $I and $R files present via the Command Prompt.

The $I files can be parsed using tools like $I Parse. The input to this tool will be the entire Recycle Bin acquired from a target computer.

You can find metadata about the deletion operation for each file in the Recycle Bin. Timestamps are displayed in UTC. Time correction may need to be performed.

The $R files can be directly viewed using relevant applications. The PNG file has been viewed using Photos app. 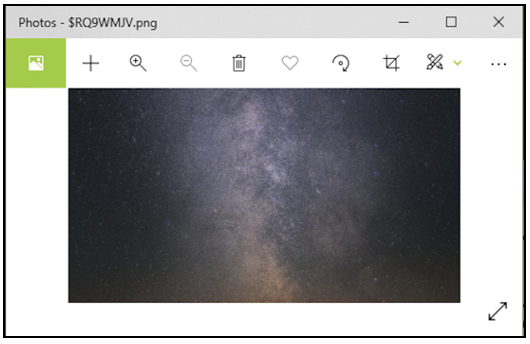 When you acquire the Recycle Bin from a target computer, parse the entire folder using tools like $I parse to find out the deletion timestamps and absolute path of the file.

Can the Recycle Bin be configured?

The Recycle Bin can be configured through it’s Properties menu (by right clicking it). 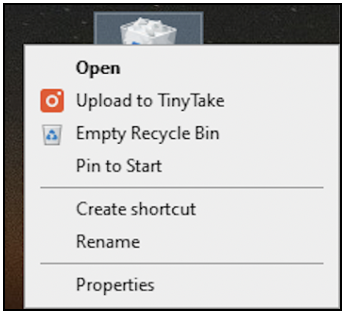 The maximum size of files that the bin can hold can be specified (selected in the following screenshot). In some cases, the Recycle Bin can be configured to not hold deleted files (second unselected option in the following screenshot). In that case, more advanced forensic techniques must be used to recover files. If you encounter a scenario where the Recycle Bin does not have any files, either it has been emptied or it has been configured to not store deleted files. 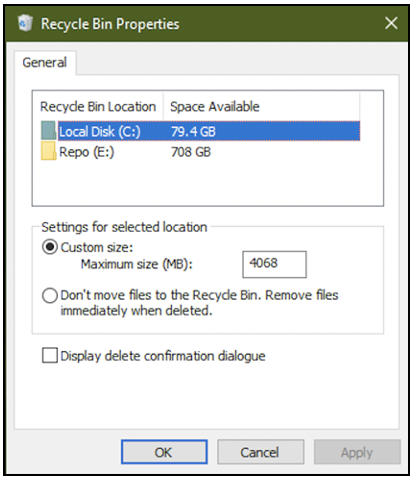 Currently there are two files in the Recycle bin of the currently logged in user. The latest addition to the bin was at 06:00 hours, as seen by the modification time in the following screenshot.

If one file has been restored,

Then only one file remains in the bin, that was deleted at 05:59 hours.

Since the bin has been modified, its modification time is updated to when the file was restored.

Now let us delete the other file too.

The bin is empty now.

Now the modification time of the bin is updated to when the deletion was performed.

You can find files within the Recycle Bin folder, when the delete key is used or when the user right clicks a file and selects Delete. When the Shift key is held down while using the delete key to delete a file, then the file is stored in a hidden system file and is not accessible to any user. In that case, advanced forensic techniques must be used to recover the deleted file.

Here is a project idea for you: