When using the Linux command line, you may need to save the output of a command to a file. In some cases, you may need process the output of one command using another one. In these situations some special command-line operators prove to be useful. This blog post gives you a brief introduction to how redirection and pipe operators can be used in the Linux command line.

The following demo has been performed on Ubuntu. User spark has been logged into the computer. Currently, the user is within the test folder in the /home directory. Take a look at this post for an introduction to commands to perform basic file and directory operations.

pwd command refers to path of the working directory. It prints the absolute path of the directory the user is currently in.

This is also verified on the GUI.

touch <name of file to be created>

Here a file called sample.txt has been created within the test directory.

This can be verified using ls command

And also on the GUI.

The contents of sample.txt can be viewed using cat command. Currently the file is empty.

We will add a line of text to the file using the redirection operator (>).

echo command is used to simply print some text on the screen. The text to be printed is presented to the command in quotes.

[command 1] > [filename to direct results to]

Let us review the contents of sample.txt using cat command. We can see that the text ‘good morning’ has been successfully written into it.

Let us attempt to write another phrase into sample.txt. We expect to see ‘good morning’ and ‘good afternoon’ written into the text file one after the other.

To append contents to the file, the redirection operator must be used two times as shown in the following screenshot.

Now, as expected, we can find two lines of text within sample.txt.

The redirection operator can be used to direct the output of any command to a file.

Now let us consider a CSV file test-data.csv. The ID, name and location of 30 people are stored in this file. There are 31 lines in this file in total: the first line that has the field names and 30 lines having user information. 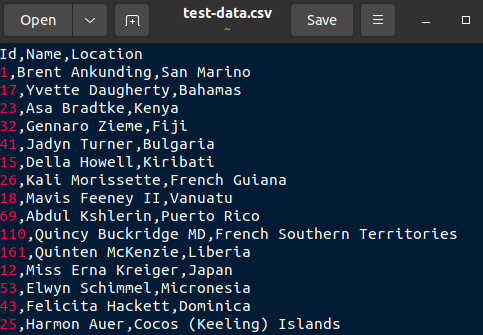 The following screenshot shows how cut command is used to display only the ID and location fields for all lines in the CSV file. This post gives you can introduction to how cut command can be used to view specific fields of information.

Let’s try another one. sample.txt discussed earlier had two lines in it: ‘good afternoon’ and ‘good evening’; which accounts for 4 words. Let us use cat to display the contents of sample.txt and pipe that output to wc to count the number of words it.

From the following screenshot, we can see that wc has identified the number of words in sample.txt to be 4, as expected.

How will redirection and pipe operators be useful for a cybersecurity professional?

As a penetration tester and red teamer, you will need to use pipe operator to combine many powerful commands to achieve a suitable result. When a digital forensic professional needs to find the list of users on a Linux system, the result can be identified using a single command. Results of that command can be redirected into a text file to be stored as evidence. Even in malware analysis and reverse engineering, many powerful Linux command-line tools will help to process malicious binaries, for which usage of pipe operator becomes a regular task. Knowing how these operators work, will help you utilise the available commands to their fullest benefit.