Before we can do that, let’s lay the groundwork for the distinctions between the x86 and x64 architectures.

The 64-bit architecture is the result of hardware advancements to which software had to adapt.

The 32-bit architecture provides registers and addresses with a size of 32 bits (4 bytes). In this manner, the address space is constrained by the 8-bit value.

The amount of memory accessible with 64-bit is significantly greater. As 64-bits are equivalent to 8 bytes, all registers and addresses on a 64-bit architecture are double the size.

In addition, the number of registers in 64-bit processors has grown.

As they are also larger, they have been given a new naming convention; their names all begin with "R"

The individual sections of a register are directly accessible. On 64-bit architectures, you can refer to EAX of RAX in the same way that you could access AH or AX of EAX on 32-bit architectures.

In addition, a number of new general-purpose registers were added to facilitate more complex operations.

In x64, the following registers exist:

And the new registers are:

The existence of new registers also influences the manner in which functions are called. No additional arguments are added to the stack.

Instead, the first six arguments are passed to a function as follows:

From the perspective of exploit development, all these changes present a new obstacle:

When dealing with buffer overflows on x64 systems, you may also encounter instances in which the mapped address space is constrained by a 6-byte hex number. This indicates that you cannot overwrite the EIP with 0x4141414142424242.

The only address available will be 0x0000414243444546, so exploit buffers must terminate after overwriting the EIP.

Exploiting 64-bit systems is commonly associated with Return Oriented Programming and is regarded as a complex topic. In this course, you will practice exploitation techniques against both insecure and secure x64 Linux systems.

While x64 itself is difficult to exploit, x64 shellcoding is significantly simpler.

On a 64-bit platform, we will continue to use nasm, gcc, and binutils to build shellcode:

Additionally, we will utilize the same shellcode tester application:

This time, we will create 64-bit Assembly code.

A bash-spawning shellcode’s Assembly code will be comparable to the 32-bit version. We will use the execve system call that begins a process, place its arguments in the appropriate registers, and then execute the syscall instruction (on x64, this is replaced by the 0x80 instruction).

First, we will start with the proper syscall. For execve on x64, it is 59: 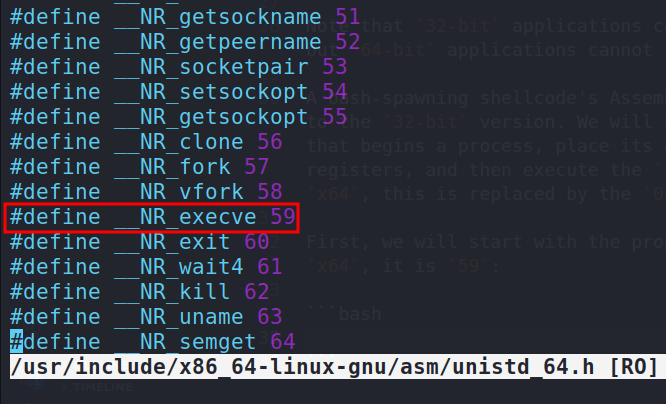 As with 32-bit shellcode, we need only point the first argument to "/bin/bash" and leave the remaining two arguments blank (NULL).

Before executing the syscall, the syscall number must be placed in RAX, while RDI, RSI, and RDX contain the arguments to execute.

In this instance, we will not pass any arguments or environment variables to the program we wish to launch, so the only element of that array will be a nested pointer to the /bin/sh address (pointer to pointer).

RDX, the final argument, can be null.

Let’s begin writing Assembly code. You will notice that it differs little from the x86 version:

Compilation is similar to what we did for x86, with the exception that we will instruct the compiler to generate an x64 executable: 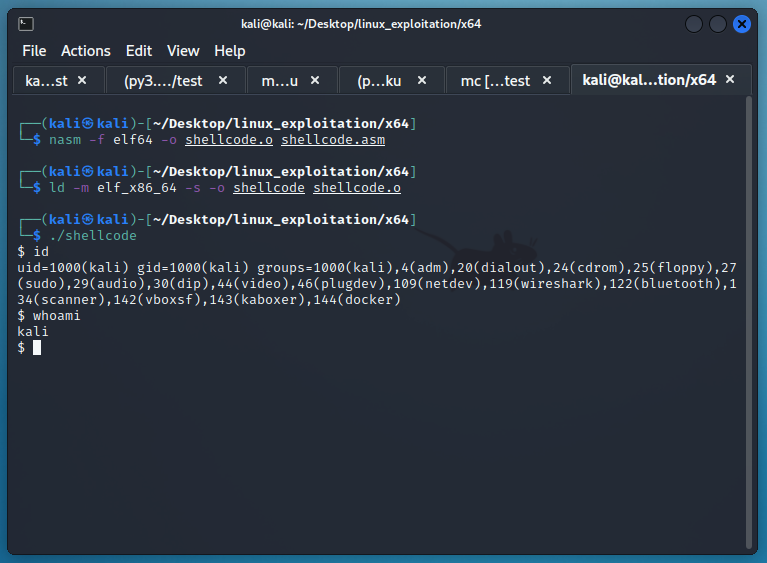 Let’s extract the opcodes from the executable using the extractor.sh script:

Now, we compile it to test whether the shellcode works:

As you can see, shellcoding in x86 and x64 is comparable. However, the Assembly code must be modified according to the rules enforced by the underlying architecture.

It boils down to calling the appropriate syscalls and setting their arguments in the correct order.