In prior blog posts, we concentrated on stack-based buffer overflows. We assume you are familiar with how arguments are passed to functions (via the stack prior to a function call) and how the stack operates during the execution of a program.

The format string is directly associated with the printf* family of functions and functions such as:

-fprintf - prints to a FILE stream

What is the connection between these functions?

Each is utilized to print data to a specified location.

However, what makes them unique is that they all utilize arguments that function as string formatters.

For example, you have already seen arguments like the following:

When supplied with a string format argument and another variable as an argument, Printf()-like functions will use the format string (first argument) to print the variable (second argument) in a particular manner.

Multiple formats can exist within a single printf command. Consider the following piece of code:

It is compiled with the default compiler:

and then executed. The following variables are printed in their respective formats: first as a decimal, then as a pointer, and then as a string.

Change the code so that the printf formats do not correspond to the supplied arguments. In addition to converting all formats to %x, we add an additional formatter. We now have four formats and three arguments to format. We compile it with gcc and ignore any warnings that are generated:

Now, when the program is executed, it does not segfault. It prints all values plus an additional value:

Let’s run the program in the debugger to observe its inner workings. We will place a breakpoint on printf and then launch the program.

Now, if we examine the stack layout prior to the call to printf, we recognize a number of values. The first address is the return address, and the second address points to the string-based formatting argument that is stored in memory.

As you have likely observed, there is no information regarding the variables we wish to print.

The user is responsible for supplying the proper number of arguments and formatters when using the printf function. As with every other function, all function arguments are pushed onto the stack during the call.

The formatting portion comes first, followed by the arguments to be formatted.

If the number of formatters exceeds the number of arguments, the following stack items are assumed to be arguments. Again, we will modify the example program.

The gcc will emit additional warnings.

As we see, in this case, printf starts to take subsequent items from the stack and print them:

In the early 2000s, hackers began abusing the printf() function’s behavior. If a user had access to the printf arguments, he could cause the program to behave in an unanticipated manner.

Thus far, the example provided has been informative. Leakage or denial of service may occur when a segfault occurs.

We will attempt to alter the original execution flow of the program for the purpose of this example:

As seen in the source code, there is non-executable code (function deadcode()). Additionally, the vuln() function is called within the main function.

The vuln() function receives user input from stdin and copies it to the buffer[512] memory location.

This memory location is then passed to printf as an argument.

If the user enters valid characters as an argument, the user’s input is returned. Nonetheless, if string formatters are present in the buffer, the function prints out subsequent stack positions as requested.

Clearly, this is not the intended behavior, and we have confirmed that the application is susceptible to format string vulnerabilities. But how can we capitalize on it?

First, we will attempt to print the string returned by the function deadcode(). The next step is to change the value of the variable target; as you will soon discover, printf can both read and write memory values.

Let’s first attempt to traverse the stack and examine its values. To accomplish this, we will employ a Python script whose output will be written to a file and then fed to the vulnerable application:

The result is that our string AAAA and the format arguments are placed somewhere on the stack.

Then, when printf parses the format arguments, it pulls 10 items from the stack and formats them as pointers before printing them to stdout.

Assume we are willing to exploit this vulnerability in order to leak information, such as a stack cookie. In this scenario, only one of these stack values will be of interest to us. Can we directly access one of them?

Let’s assume that we want to print only the AAAA string we fed into the binary at the outset, and not all of the stack’s items along the way. To accomplish this, we can utilize Direct parameter access.

Direct parameter access is a particular format parameter type. Instead of writing %p %p %p, we can write %3$p to format the third value as a pointer.

Let’s just get the AAAA using the direct parameter access, as follows:

Can the string AAAA be printed using this method? No, unfortunately.

By reference, it indicates that it expects a pointer to the formatted argument, which is the case with percent signs. Since there is only 0x41414141 on the stack, this is not a valid memory location; attempting to use a pointer to such a value results in a segmentation fault.

However, %p only requires the value, so whatever is on the stack will be printed. When testing for format strings, it is crucial to use formatters that require a value.

If you feed a vulnerable application an excessive amount of %s characters, it is likely that it will crash.

%n is unique among format parameters because it permits writing bytes to memory rather than reading them. This is the reason why format strings are so dangerous.

Using a format string vulnerability, we achieved a write-what-where condition.

In this instance, a suitable target for the overwrite is:

Let’s use a modified source code of the vulnerable program.

A utility function has been added. It will be compiled with the following options:

However, in such a scenario, neither DEP nor ASLR can prevent the format string exploit because we do not operate on stack execution or randomize addresses.

We’ll exploit an arbitrary write using the format string. Let’s begin by deciding what and where we will write.

As the function that calls a shell is located at 0x80484eb, we will write this value to the current pointer.

Right after the call to printf, there is another function called in vuln() - exit().

This is a good candidate for the GOT overwrite, as it is called directly after printf.

The disassembly allows us to locate the GOT entry for the exit: 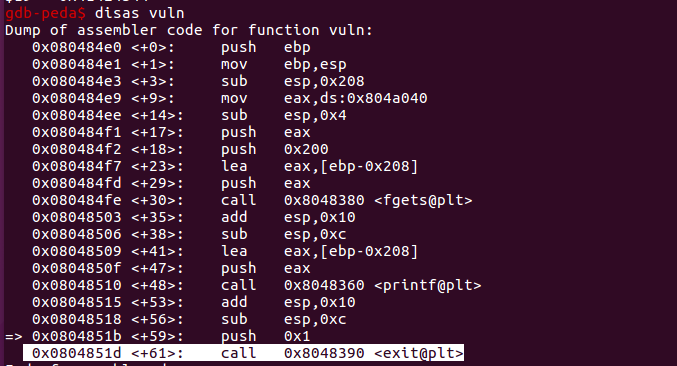 We will save it as e. Then, a breakpoint is placed before exit to ensure that the entry was written correctly.

As the breakpoint is hit, we examine the memory content at the GOT entry for exit. The address of shell() is there!

If we allow the program to continue, we see that bash is spawned.

As follows, we will run the exploit outside of the debugger and use the cat trick to keep the stdin open.

The stdin is corrupted but the shell is spawned. We have a working exploit.

Let’s summarize the proces of exploiting a format string:

The occurrence of format strings in the wild is still possible, as demonstrated by actual usage. In addition, they can be an effective secondary attack vector for creating memory leaks.