Stay One Step Ahead of the Hackers by Hunting Suspicious Traffic

It is essential to understand what is normal in order to recognize what is not normal, such as a connection to port 443 with cleartext traffic. It is not possible to examine hundreds of thousands of packets per day at a workstation. Should malicious traffic traverse our hunting grounds, we should have access to a variety of enterprise products, including open-source software, that will assist us with this task and, ideally, capture a substantial amount of it. In this article, we will discuss how to identify normal network traffic when analyzing packets. The purpose of this article is to train your eye should you ever be required to inspect live or saved network traffic (PCAP).

Beginning with the ARP protocol.

Again, although we should be familiar with these protocols, we will briefly describe each one before analyzing their respective traffic.

ARP is a Layer 2 protocol that IP uses to map IP addresses to MAC addresses. Typically, ARP messages consist of a REQUEST message and a RESPONSE message. The message header is concluded with one of the operation codes listed below: 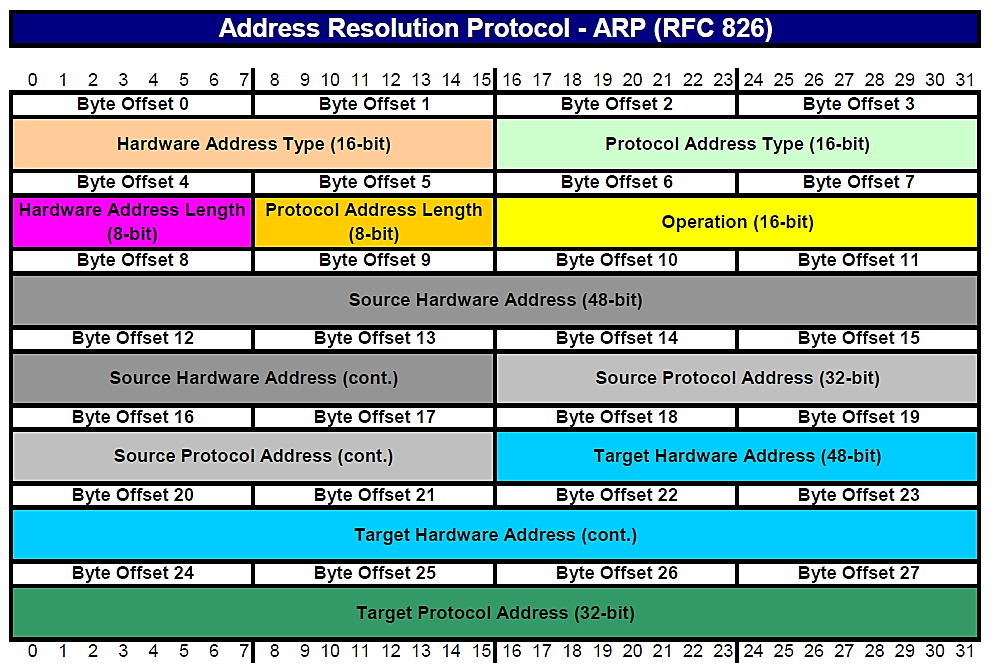 Some information to help differentiate between normal and suspicious ARP traffic.

To view the MAC Address for both the source and the destination, we can make the following Wireshark adjustment: View -> Name Resolution -> Physical Address Resolution 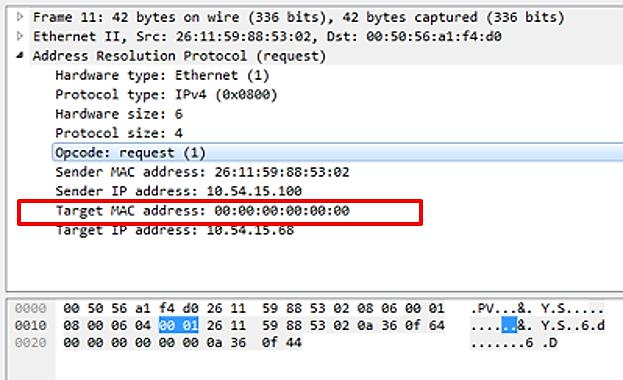 This packet contains the response to the preceding packet: 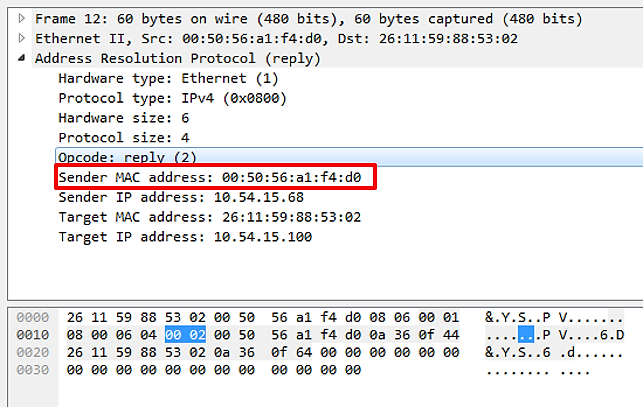 The preceding packets were generated by a virtual machine.

The following packet reflects an ARP Request with a broadcast address as the destination within a network. 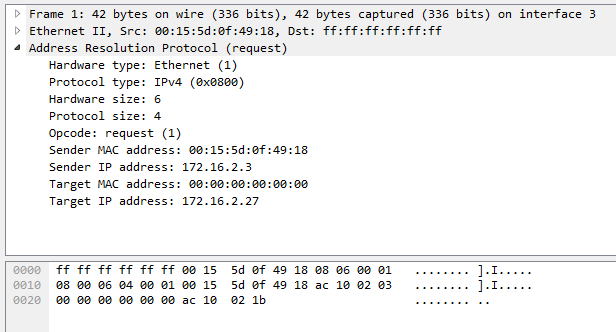 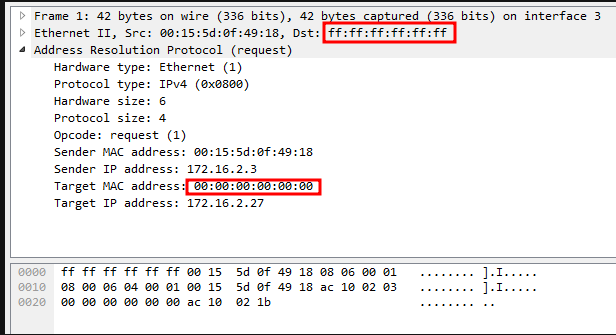 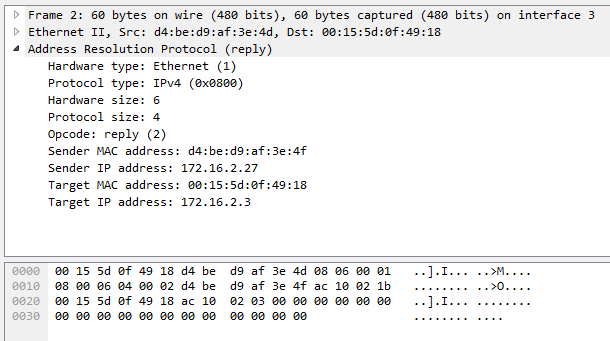 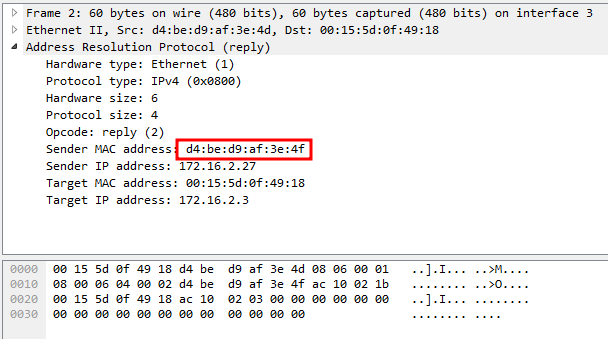 Using Wireshark, we will now examine an example of suspicious ARP traffic.

Remember the following guidelines regarding normal and suspect ARP traffic:

Here is an image of a packet capture.

It displays seven ARP Request packets that were broadcast. According to physical address name resolution within Wireshark, the source device appears to be a Cisco device that is monitoring the status of various network devices.

How would we determine whether or not this is suspicious traffic? How do we know it’s not an issue with the Cisco device’s configuration or its normal behavior? Is Cisco equipment even present on the network?

Depending on your answers to these and other questions, you will determine whether further investigation is necessary. In this case, we will assume it is typical.

How about this traffic? Would it be considered suspicious or normal?

Clearly, this is suspicious traffic.

Even without knowing what legitimate device on your network could have that MAC address, we can tell something is amiss based on the rate and volume of ARP Requests. Beginning with packet 15, IP addresses increase by one and the time between packets is relatively short, indicating a scan.

Organizations may prohibit pinging machines within the network, but this does not impede the reconnaissance phase. An attacker may use alternative methods, such as an ARP scan, to obtain the desired information, a map of the internal network.

If your organization does not implement USB Lockdown procedures, it is very simple to insert a USB drive and launch a variety of tools, such as penetration testing operating systems.

To return to the MAC address, it is quite simple to change the MAC address of a host to make it appear to be a legitimate device, so we cannot rely on it either.

In order to know when to investigate and when to ignore ARP traffic, it is necessary to recall the fundamental behavior of ARP from both the client and network device perspectives.

ARP can also be employed for nefarious purposes via techniques such as ARP Poisoning (Person-In-The-Middle Attacks).

Refer to the Wireshark Display Filter Reference for ARP for additional information on filtering ARP traffic.

ICMP (Internet Control Message Protocol) provides information about various network nodes. It is commonly employed during troubleshooting. ICMP is utilized by utilities such as ping and tracert.

Here you can learn more about ICMP.

Below are the packet details for packet 4, the Echo (Ping) Request packet:

Type 8 & Code 0 both indicate that this packet is an echo request. Data represents a random text string.

Below we see packet details for the Echo (Ping) Reply packet, packet 5:

Both Type 0 and Code 0 indicate that this is an echo reply. Data should be the same string of random characters as the echo request. If so, the ping utility returns a success message to the command line.

The data field of an ICMP can serve as a covert channel or even an exfil channel. Large ICMP packet sizes should be a warning sign. Additionally, keep an eye out for uncommon types/codes within ICMP packets that are followed by a request, such as a Timestamp request.

The Wireshark Display Filter Reference for ICMP can be consulted for additional information on techniques for filtering ICMP traffic.