During a buffer overflow attack, the entire buffer is not always allocated in its original form within the memory of the target program. Egghunter shellcode, or egghunter, is a specific type of (small-sized) shellcode that can be executed when a user’s buffer is split and allocated in an unknown portion of memory during an overflow.

It is not uncommon for the majority of your payload buffer to be allocated in a random region of memory when a buffer overflows. Additionally, occasionally the buffer is truncated, making it impossible to fit your shellcode within the available space.

In such cases, it is frequently possible to deliver the shellcode to the program’s memory via an alternative channel.

For instance, an alternative form of input via a different functionality than the one being attacked.

Numerous applications store user input in memory for longer than necessary. We can deliver the shellcode to the application that truncates the payload by exploiting this vulnerability.

However, the remaining conundrum is how to reference shellcode delivered through an alternative channel.

Egghunter shellcode can search the entire address space of a process for a particular set of bytes. If this specific set of bytes is discovered, the egghunter will move the execution flow to the space in which they reside. In addition, it is approximately 40 bytes in size and can be used when portions of the user buffer are corrupted or truncated.

The egg is essentially the shellcode that searches for the larger portion of the shellcode, which can be distinguished from the rest of the memory’s contents by a special marker. Let’s examine a real-world example of an egghunter shellcode to better comprehend its operation.

In a whitepaper, a security researcher with the online alias “Skape” has discovered and documented multiple methods for creating an egghunter. It is available at the following link:

The function will be used to locate a user-selected “egg”, also known as a “marker” or “tag,” which consists of four bytes. These four bytes must be specified in the egghunter shellcode, but they must also begin the second section of the shellcode.

Since various random bytes are generated at runtime and are stored in memory, it is possible that some bytes have already formed the same four-byte pattern.

To prevent such misunderstandings, the egghunter shellcode will double-check for the marker tag.

Only if it is found twice in a row will the execution immediately follow these marker tags.

The Assembly’s implementation of the NtDisplayString egghunter shellcode looks like:

It can be translated into the following sequence of bytes:

Obviously, you are not required to memorize this shellcode.

Depending on the architecture or OS version, Egghunter shellcodes are available on the web.

Additionally, mona can be used to generate an egghunter.

The -t option specifies the marker tag which will be later referenced by the egghunter shellcode to find the second-stage payload.

Vulnserver is a TCP server that accepts multiple command-argument pairs. Each command can be utilized in a unique manner. In the following tutorial, we will concentrate on exploiting vulnserver with an egghunter shellcode.

This time, we will only concentrate on the exploitation aspect. Let’s begin with the skeleton of an exploit: an overflow in the vulnerable KSTET method.

At the conclusion of this exercise, the complete exploit code will be made available; this is what was used to cause the application to crash.

We will begin by validating the crash. First, vulnserver must be run through Immunity Debugger in order to obtain a clear view of memory activity.

After launching the exploit against the instance of the vulnserver, we observe a crash with a vanilla EIP overwrite.

As is customary in such a scenario, the first step will be to determine the exact buffer length required to overflow the EIP. Using mona.py, we can generate the following pattern:

Using the newly created buffer to launch the exploit causes the vulnserver to crash. Using mona, we can determine the offset to EIP:

It appears that EIP is overwritten after 70 bytes of garbage data. Let’s confirm that, and we’ll also modify the exploit slightly.

After launching the most recent exploit, we can examine the memory following the crash.

We can draw the following conclusion:

Even when condensed, 90 bytes are insufficient to store a more complex payload (e.g. a reverse shell shellcode). In addition, shellcode must occupy at least a few hundred bytes in order to account for the possibility that some invalid characters will be discovered. How shall we proceed?

We may attempt to establish a second connection to vulnserver while sending the exploit buffer.

Try including the execution of a second command in the exploit. Then, let’s execute the crashing command and use mona to search for it in the program’s memory.

600 bytes is sufficient for storing even large shellcode. Let’s give it a shot and launch the updated exploit at the vulnerable server.

Before concluding that this is a suitable location for shellcode execution, let us examine the bad characters. We can assume with certainty that the null byte is a badchar. What about the remainder? For your convenience, use the ASCII table below.

Then, the theoretical flow will appear as follows:

After relaunching the application and the most recent vulnerability. The egghunter was successfully executed and identified the majority of our shellcode.

Everything works fine. Let’s then proceed to the final step.

Shellcode must be added in place of the breakpoints.

We can use one generated by msfvenom: a simple calc.exe will suffice to confirm code execution. 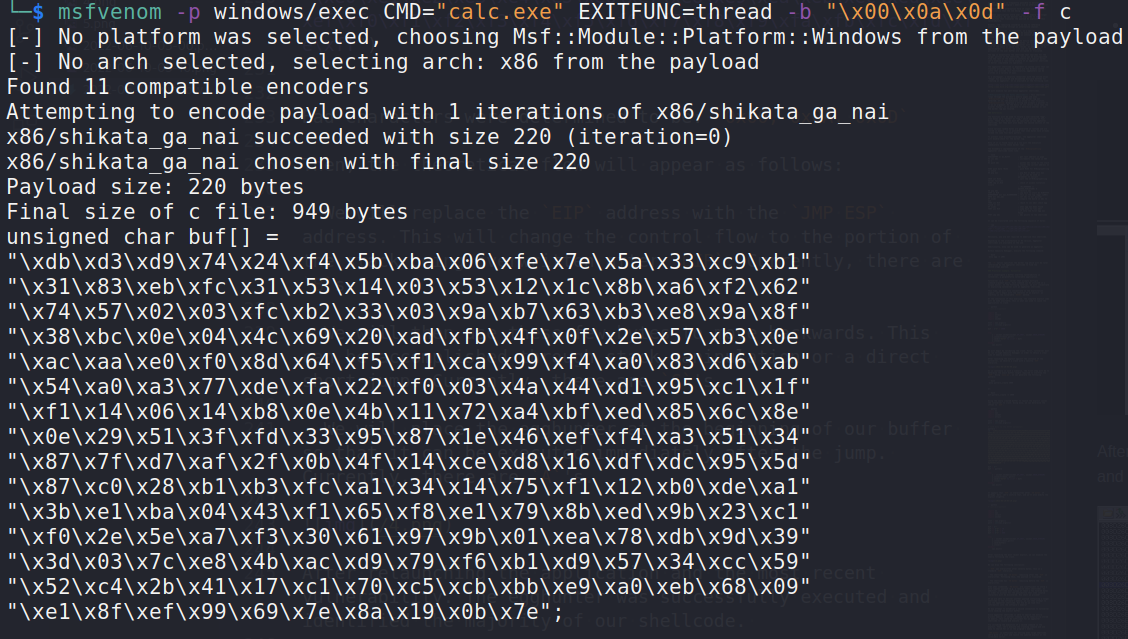 After pasting it into the exploit, let’s run the vulnserver normally (outside of the debugger) and then apply the exploit to it.

We should see calc.exe being executed!