Previously we discussed the basics of windows shellcoding, this method is compact and does not cause memory corruption upon exit. However, it has some disadvantages as well.

This shellcode contains hardcoded addresses, meaning it can only be used against a specific system version, in this case Windows XP Service Pack 1.

As stated previously, all system DLLs are loaded at static addresses within the same service pack version.

Due to this, shellcode that operates on XP Service Pack 1 is ineffective against SP2 and SP3. Our next step will involve the creation of universal shellcode that will run on any service pack without requiring the hardcoding of addresses.

How can this be achieved?

Microsoft documents some of the structures on their official website.

A portion of them have been reversed by other individuals and organizations and made available to the public. These structures are referred to as “undocumented” because they lack official documentation.

Structures are similar to database tables in that they organize data. Each field of a structure may have a distinct data type, but these types must be predefined.

As you are already aware, each data type has a maximum allowable size in bytes. Knowing what data types are members (fields) of a structure provides information about when a particular field begins and ends, as well as the offset from the beginning of the structure at which a particular field can be located.

In contrast to a database, where all data types are standard, such as varchar, timestamp, and int, data types in Windows structures are typically custom.

Microsoft created them, so it is normal for a structure to contain data types that are unfamiliar to you. The only way to determine the amount of memory required to store a particular data type is to read the documentation or, if none is available, attempt to reverse engineer the structure.

Fortunately, this article will rely on structures that have already been reversed or documented.

If you want to be comfortable with debugging and exploiting in a Windows environment, you must become familiar with these data types, which may have a different size or name than the typical C/C++ data types.

Numerous structures are nested within one another, and Windows is built on top of them.

Similar to the exception handler information that was previously stored in FS:[0], additional interesting information is stored in process memory.

The Process Environment Block is one such fascinating structure (PEB):

The “Reserved” fields are not documented.

However, at this time, only the offsets and data type sizes are of interest. If we can locate the beginning of a structure and know its offsets, we can navigate to any field it contains, even if it is deeply nested.

It was discovered that if we can access PEB, it is possible to obtain the address of certain libraries and functions contained within them. This is the rationale behind all of these specific details on structures. Therefore, it will be possible to emulate Arwin at runtime and retrieve the current address of specific functions, rather than hardcode them. They can then be utilized further within the shellcode.

The following is a method for traversing Windows structures:

This possible with the following Assembly code:

When the code is compiled, it has a significant disadvantage: it contains null bytes. Consequently, it cannot be inserted into any exploit buffer. To get rid of them, we must refactor the code slightly.

The address of kernel32.dll is stored in the ebx register as a consequence of the preceding shellcode. Now let’s determine how to locate the WinExec() address using it.

A DLL file, which is a dynamic-link library, is a PE (Portable Executable) file. Once again, this file format has structured metadata that can be traversed to obtain valuable information.

When discussing a PE Executable file image, the term RVA can be used (Relative Virtual Address). RVA represents the address relative to the beginning of the file image, or the offset from the base address. Also, when discussing DLLs, the term “Export” is frequently used. DLL Export functions are, in a nutshell, the functions that can be utilized upon loading the library into the process memory.

There are the following structures in PE format:

Let’s determine precisely what is required to obtain the address of a specific function.

Next, a loop must be created. The loop will traverse the Name Pointer Table (since we know its address) and compare each entry to WinExec while remembering the table index of the currently checked item.

Upon completion, we must locate the index of the WinExec function in the Ordinal Table (Address of Ordinal + (index *2)), as each record in the table consists of 2 bytes.

Using the Ordinal number, we navigate to the Address Table at the Address Table + (Ordinal Number * 4) position, given that each Ordinal Table entry occupies 4 bytes. Using the RVA and the DLL’s base address, we can determine the function address.

Let’s begin by pushing the string WinExec onto the stack.

We will need to remember its location and use it as a point of reference when searching for a name within the DLL.

If you attempt to xor esi and then push esi which contains 0 after the xor operation, and then push the string WinExec, you will encounter null bytes. Since the stack is 4-byte aligned, we cannot simply push the 7-byte Winexec.

Thus, we will use a trick to place the WinExec\00 string onto the stack. Due to the endianness, we can actually push:

Therefore, we only need to focus on the initial push. We may not push 0 directly, but since ASCII is one of the ways that raw data is transmitted, this is unnecessary. Once bytes are interpreted, we can simply push numbers. which correspond to ASCII characters

If we try to push 0x00636578 (\x00cex), we will deal with null bytes again. But we can push a number that is incremented by a value of choice (that does not contain null bytes).

Using this method, we can place a single null byte on the stack by concealing it within basic arithmetic. By pushing “safe” values to a register, modifying them with arithmetic so that they reflect the desired ASCII values, and then pushing them onto the stack, many bad character restrictions can be circumvented.

The code for pushing winexec will then look like below:

Let’s return to the function searching routine; we must incorporate the structure traversal algorithm that was just described. The Winexec name push will also be implemented.

At the conclusion of the resulting shellcode, EAX will contain the address of WinExec. The final step is to push WinExec’s argument (the binary to be executed) onto the stack.

We will also use the second argument, window state, passing its default value SW_SHOWDEFAULT, which can also be passed as the number 10.

We will push the entire binary path. Since it is perfectly 4-byte aligned, the push trick is unnecessary; we can push a register with a value of zero and then push the entire path in increments of 4 bytes:

Finally, we will equip the shellcode with its own stack frame so as not to muck up the program – the shellcode is quite large, so it is good practice to keep the stack clean after it has completed.

Let’s add it to the code and put all the pieces together to create a peb-based shellcode that functions:

Upon finishing, it’s time to compile the shellcode using nasm, as follows:

We’ll also extract the opcodes in order to paste them into the shellcode tester program, as follows: 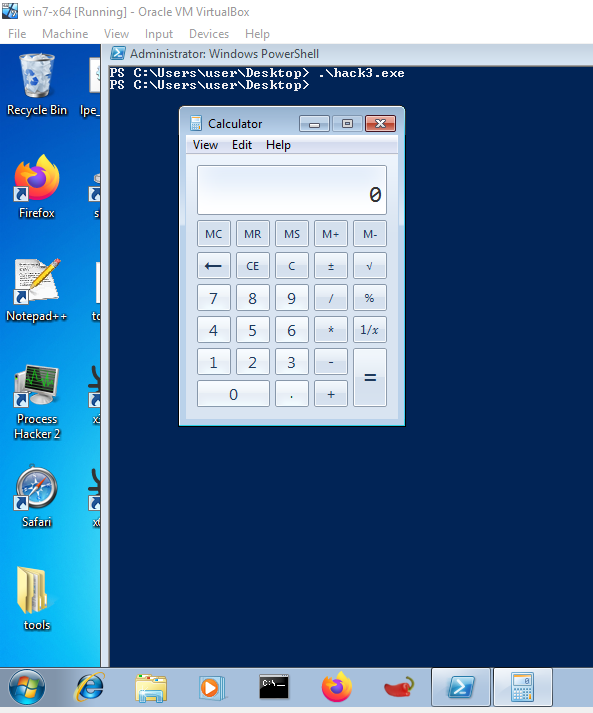