How do intrusion detection systems work?

The intrusion detection system (IDS) is a security system that monitors, detects, and protects a network from malicious activity. IDS works by alerting when an intrusion is detected. IDS are widely used to strengthen an organization’s security because they monitor all incoming and outgoing traffic for any malicious activity. There are two kinds of IDS: active and passive.

How does an IDS work? 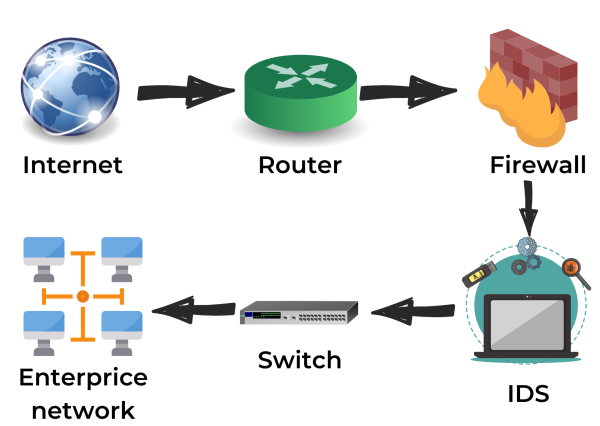 Anomaly detection is a method that contains a database of how a system normally behaves. The behaviors of the systems compared with the database, anything else is considered an anomaly, and an alert is generated for a potential threat. Although his method is useful in detecting threats, creating a model of normal software use patterns is the most challenging part.

This is a technique that uses both Anomaly-based and Signature-based detection. This allows an organization to efficiently detect, intercept and contain more potential threats with fewer to no false positives.

A true positive occurs when the intrusion detection system generates an alarm if a legitimate attack is underway. An attacker is actively attempting to infiltrate a network in this situation.

A false positive occurs when an incident causes an alarm despite the fact that no genuine attack is taking place. It happens because the intrusion detection system misidentifies normal system behavior as an attack.

A false negative occurs when the intrusion detection system fails to alert despite the network being attacked. This is the most dangerous failure because the system’s primary function is to detect threats.

A true negative is a condition in which an intrusion detection system considers the event in question as genuine, implying that the IDS is functioning properly and disregarding the system’s regular behavior.