Every time you use your Windows computer, you are navigating through many files and folders. When you open a folder for viewing, you may also modify its viewing preferences. Windows stores information about it. Think of it as a logging system for folder access. These logs are stored in Shellbags. This blog post will introduce you to Windows Shellbags and highlight their significance for digital forensics.

Why does Windows use Shellbags?

Shellbags also retain information about folders that had previously existed on a system and were accessed. When removable media like a USB drive or an external hard disk are connected to your computer, you would open a folder to view the contents of the external media. This activity qualifies as folder access, which is logged by shellbags.

If your computer had connected to a network share, accessing that network share folder causes an entry to be made within the shellbags.

Where are the shellbags stored?

Shellbags data is stored across two user registry hives on your computer NTUSER.DAT and UsrClass.dat. Shellbag information from these two hives can be accessed within the registry hive HKEY_CURRENT_USER at HKCU\Software\Classes.

There are various commercial and free forensic tools available that can acquire the shellbags from a target computer and process it.

The following two folder operations were performed on a computer, across few days.

Let us see if we can find evidence of these two folder operations within Shellbags. Tools like ShellBags Explorer, Windows Shellbag Parser, etc. can be used to view the contents of shellbags.

Within the My Computer drop down, you can see entries for all the drives that had been mounted on the system. You can also track recent changes to Downloads, Documents and Pictures folders here. 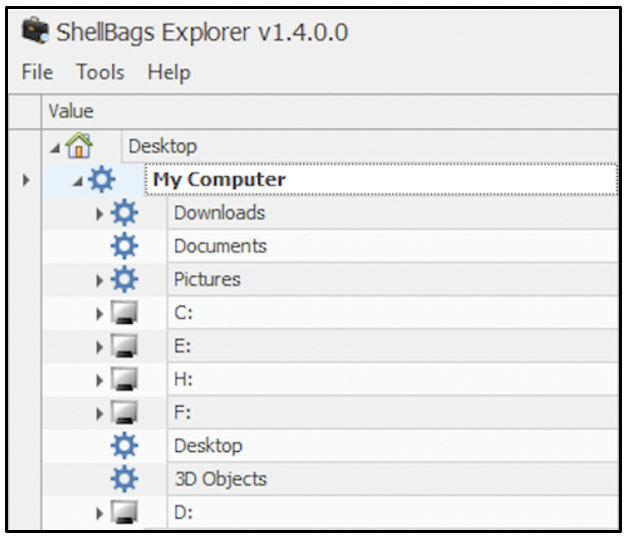 The shellbag entries relevant to D: drive show that the contents of a CD had been viewed last on 28th January 2022 at 13:19 hours.

The shellbag entries relevant to F: shows the contents of the USB drive that had been mounted on this computer. Folder entertainment had been accessed on 23rd April 2022 at 07:42 hours.

The shellbag entries relevant to Pictures folder shows that a directory called vault had been used last on 17th May 2022 at 00:44 hours. This was the folder that was created and marked as hidden.

Currently, within Pictures folder, it appears that vault does not exist.

When folder viewing options are modified to view hidden files,

the hidden vault folder can be seen.

Although there is no information within shellbags that vault was hidden, having a last interacted entry for vault indicates that the folder exists and is hidden or had existed and is now deleted.

In addition to recording changes to folders, shellbags also record information about zip files that had existed on the computer.

What is the significance of shellbags for digital forensics?

When a Windows computer has been compromised, investigators attempt to process stored logs for any trace of malicious activity. Shellbags can be another useful source to identify:

Here is a project idea for you to experiment with shellbags:

Some forensic tools display timestamps relevant to GMT. You may need to perform time correction according to the timezone your device is operating in.

A final word on shellbags

This blog post intended to provide a quick overview about the forensic importance of shellbags. As a next step, you can research about the various keys and sub-keys within the registry that store information about shellbags. One to start with can be: ‘What is the significance of the key BagMRU?’