Malware use process injection as an evasion method. It includes executing custom code within the address space of another process to achieve stealth and, in certain situations, persistence. Process injection can be performed using a variety of methods. In this article, we will discuss the most prevalent injection strategies, how they operate, and the methods employed by each.

This list will not be exhaustive, but it will include the most prevalent ones.

Understanding these strategies facilitates malware analysis and reverse engineering, hence aiding in their identification and defense.

Malware puts the path to its DLL into the address space of a legitimate process and establishes a remote thread in the targeted process to ensure the remote process loads the injected code.

Let’s see how this is achieved: 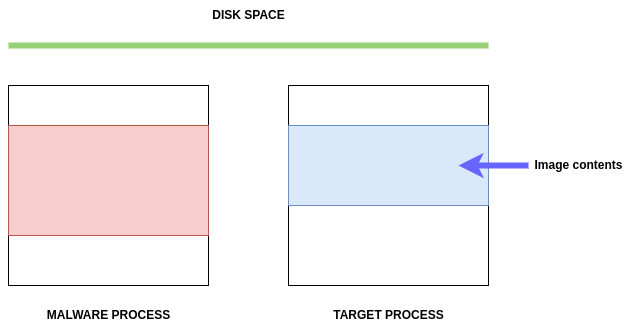 First, the malware picks a target process, such as svchost.exe, to inject its code into.

Here, we can observe the victim process that will be exploited, as well as the malware process, on the left.

The malware will load the Malware DLL into the Target Process: 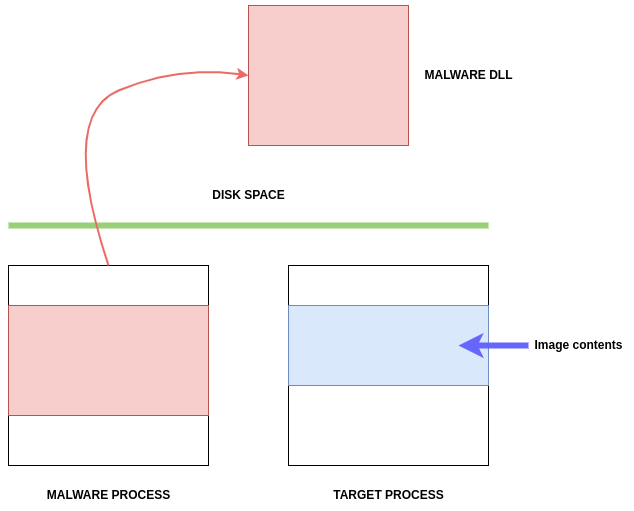 After identifying a target process, the malware calls OpenProcess to obtain a handle on the process: 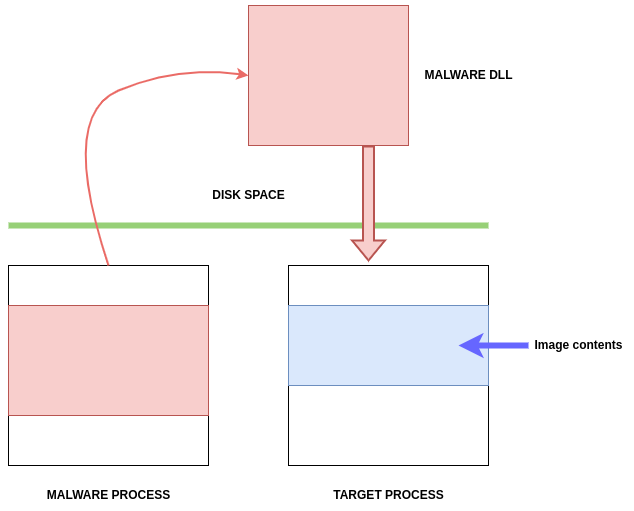 Now the malware has a handle to use and access the target process: 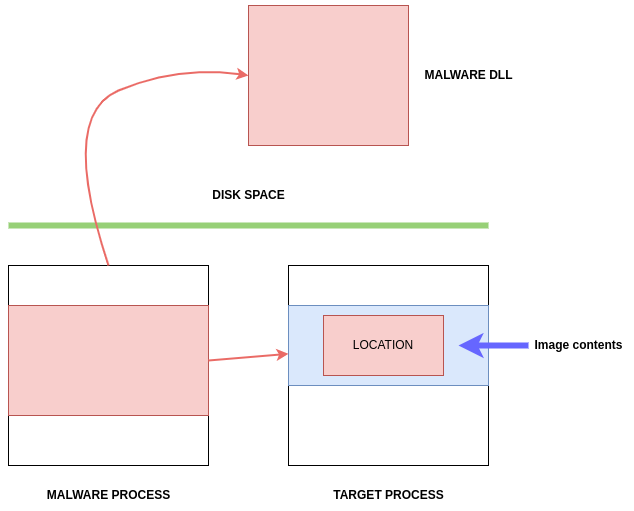 To allocate memory space to write the path to its DLL, the malware calls VirtualAllocEx:

Then, it calls WriteProcessMemory to write the path in the memory of targeted process: 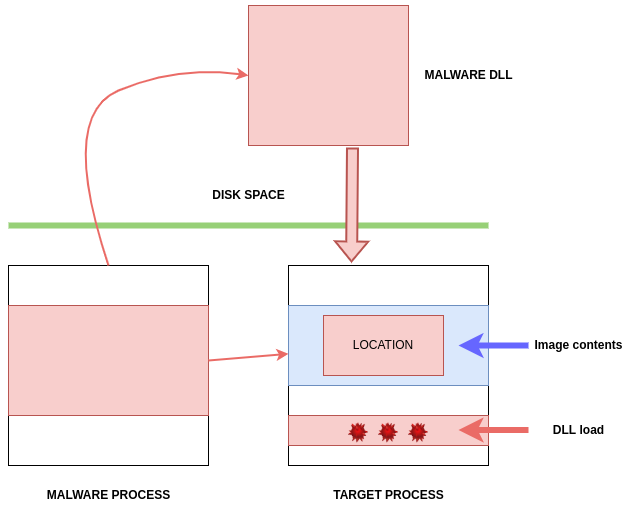 Then the malware will call an API function, such as CreateRemoteThread, RtlCreateUserThread, or NtCreateThreadEx, to execute the injected code: 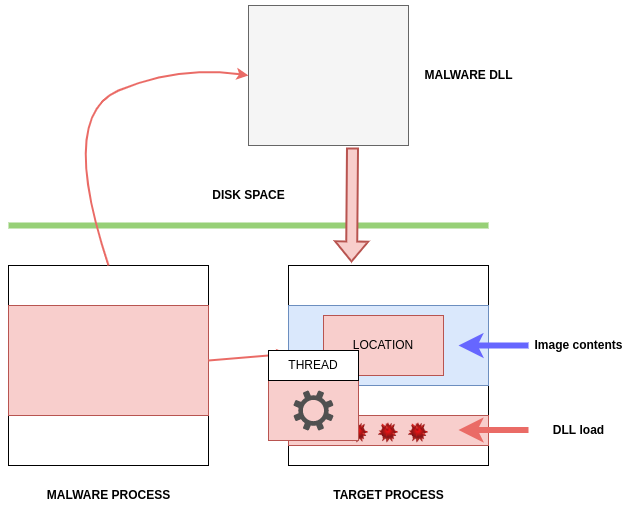 So, this is simple dirty PoC source code in C++:

But usually, the malware searches for a target process using three APIs:

In addition, this sort of injection requires the presence of a malicious DLL on disk, which is not stealthy for the adversary because it can be discovered.

Therefore, competent adversaries will not employ this tactic.

The figure below show a trace in disassembly of a DLL injection executed by the Carberp:

In this injection method, the malware copies its harmful code (rather than sending the address to LoadLibrary) into an existing process and executes it via shellcode or by invoking CreateRemoteThread.

This technique is superior to the previous one since it does not require a malicious DLL on the disk.

Again we have the malware process and the victim which is being targeted for injection:

First, the malware allocates memory in a target process, such as VirtualAllocEx: 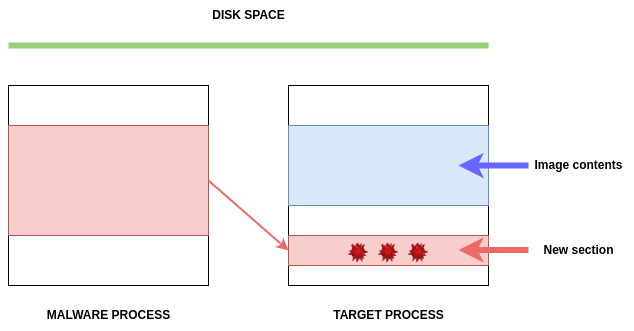 The malware then writes its code, instead of the DLL path, in the allocated memory space by calling WriteProcessMemory function: 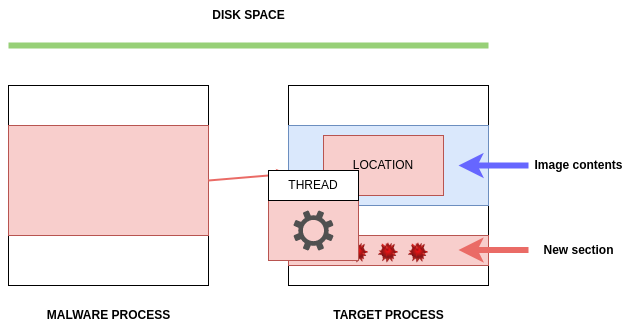 The issue with this method is that the cloned image’s base address will be altered. Injecting the malware PE into another process will generate an unpredictable new base address, requiring the malware to dynamically recompute its fixed addresses.

To remedy this issue, the malware must locate the position of its relocation table in the host process and then resolve the absolute addresses of the copied image by iterating the relocation descriptors.

This technique is less subtle than others, such as memory module injection and Reflective DLL injection, because it uses additional Windows APIs, such as LoadLibrary and CreateRemoteThread.

When analyzing PE injection, you may see nested loops (two for loops), before a call to the CreateRemoteThread function. This technique is used by Crypters (software that obfuscate malware traces using encryption).

This code demonstrates how this technique works. The code contains two iterations prior to calling WriteProcessMemory and CreateRemoteThread: 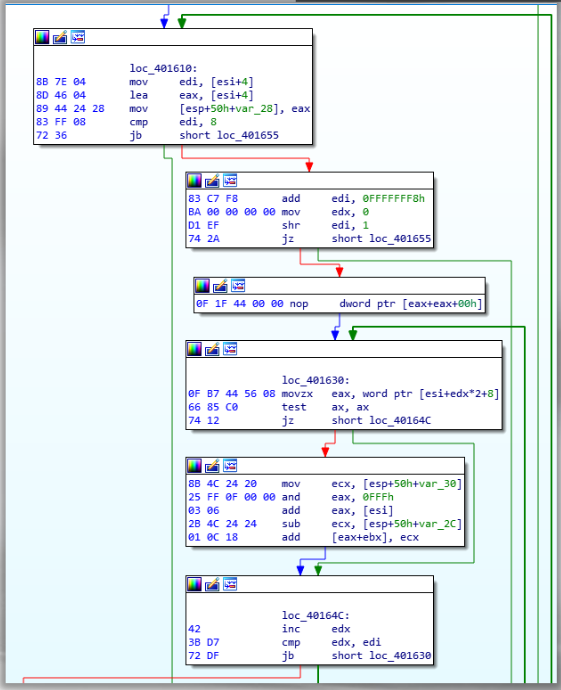 These iterations adjust the relocation table. The instruction “and 0x0fff” is another indication that the first 12 bits of the relocation block are utilized to set the offset to the virtual address.

After computing all required addresses, the only thing left for the malware to do is provide its starting address to the CreateRemoteThread method to begin its operation: 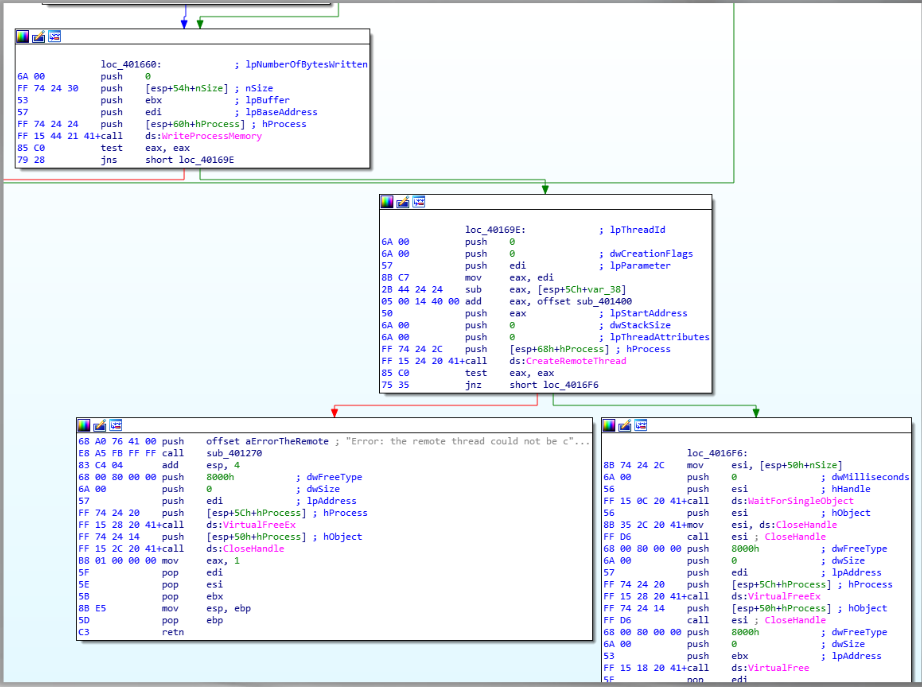 DLL injection enables the execution of your code in the address space of a currently operating process. Numerous individuals employ infections to create game cheats, to steal passwords, intercept system functions, and do another harmful behaviors, etc. However, this method is not always employed to carry out nefarious schemes; for instance, it may be used to update your application.

In the next parts of our blog, we will look at other equally interesting techniques and tactics.