We continue to review the various methods of code injection!

This is often referred to as SIR, which stands for “Suspend, Inject, and Resume.”

This variant of the injection technique injects malicious code into the existing thread of a process (thereby avoiding the overhead of creating a new process and thread) and then uses the target to start a thread in itself. Previously, the shell code would have been injected by using the name of the DLL.

As a consequence of this, when we perform analysis, we can discover that the functions CreateToolhelp32Snapshot and Thread32First come before a call to OpenThread:

To begin, the malicious software obtains a foothold on the victim’s thread.

The SuspendThread function is then used to place the thread into a “suspended” state, which is the next step in the injection process:

The malware then calls VirtualAllocEx function to allocate memory space:

There is a possibility that the code that was injected will contain shellcode, the path to a malicious DLL, or the location of the LoadLibrary function: 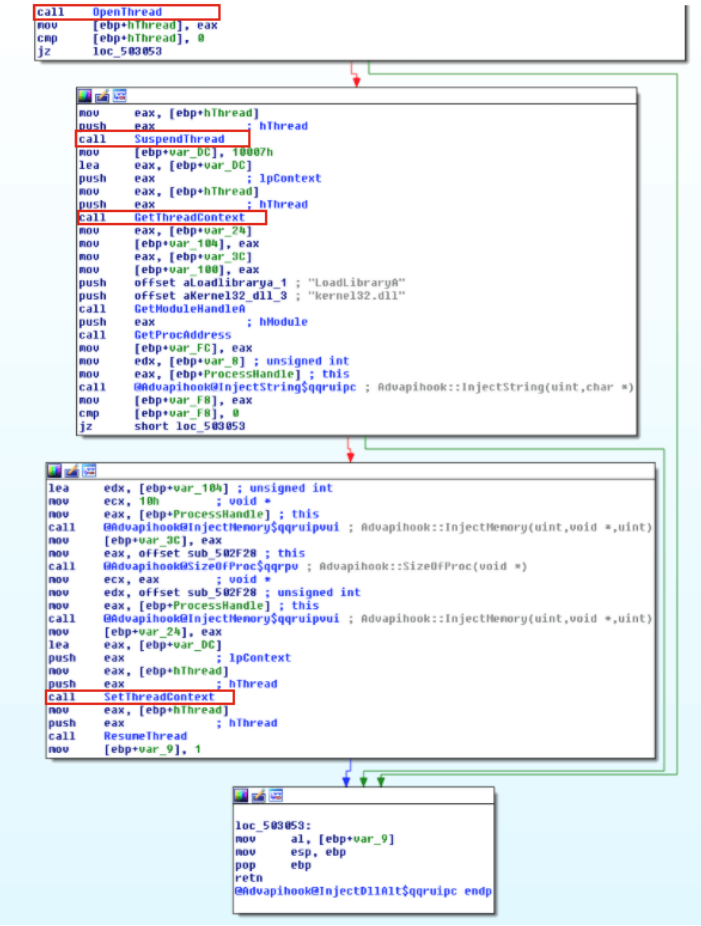 By executing SetThreadContext, the malicious software modifies the EIP register of the victim’s thread in order to take control of its execution.cThe address of the next instruction can be found in the EIP register. After that, the execution of the thread is restarted, this time using the newly written shellcode:

The “SIR” strategy could present a challenge for adversaries due to the fact that suspending and resuming a process in the middle of a system call has the potential to cause the system to become unresponsive.

If the instruction pointer is referring to an address that is inside the range of the NTDLL.dll library, then sophisticated malware would probably be able to circumvent this issue by pausing the process and attempting it again at a later time.

It is possible for malware to make use of it in order to load their harmful DLL whenever a particular action is triggered in a particular thread.

Malware may invoke SetWindowsHookEx in order to add a hook function to the chain of hook functions already installed on the system:

Following the injection of the DLL, the malicious software will proceed to run its own malicious code in the context of the process whose thread-Id was passed to the SetWindowsHookEx function. Something like:

As you can also see, the UnhookWindowsHookEx function uninstalls the hook process that was installed by the SetWindowsHookExA function.

It is necessary for the 32-bit and 64-bit DLLs to have separate names.

Figure shows the Ransomware Locky, which uses this technique: 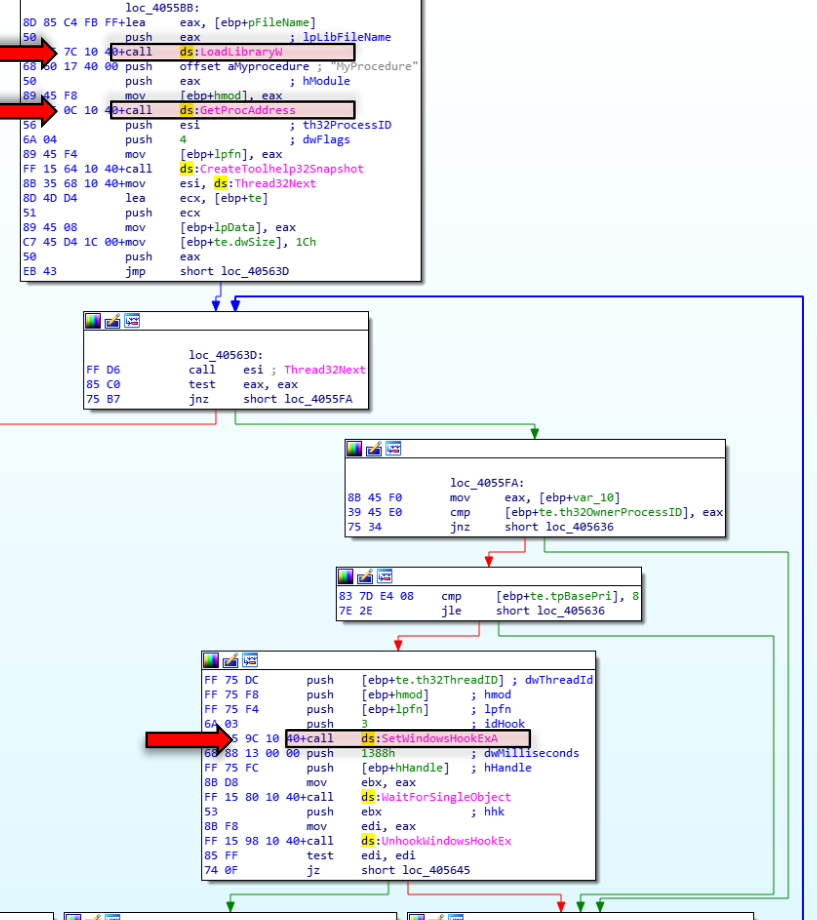 The majority of malware that steals information also includes a keyloggers via SetWindowsHookEx.

Malware known as Hawkeye is offered for sale as “malware as a service.” The Hawkeye malware has undergone regular updates and enhancements over the course of its existence. It occasionally receives updates that include newly implemented capabilities and methods.

Sample of Hawkeye malware with SHA-256: dff7820b2b0b877c46a0cbc6be22b45b11511af7d50e36c7d83fa27f3db277b0 is disguised and coded in C# language. It performs process hollowing to its child process, which is the genuine Microsoft product RegAsm.exe, which is used for .NET assembly registration. This behavior is typical of the majority of HawkEye samples.

If a breakpoint has been reached and we are able to determine the parameters with which SetWindowsHookExA was called: