In a previous article we discussed YARA rules, syntax and IOC’s. Let’s continue our acquaintance with YARA rules!

Conditions can use one of the following operators: 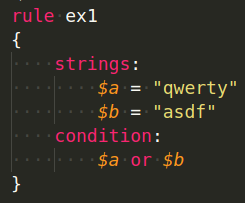 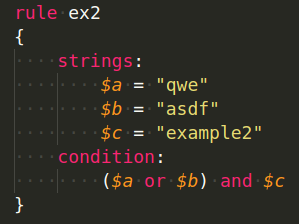 Sometimes, you might want to write an expression to check for a string or value at a certain offset, then this could be done by using the at operator in the conditions section:

You might also wish to know whether a particular string was discovered in the file, but the search is based on how many times the string was found in the sample. The arithmetic operators could be used to do this: 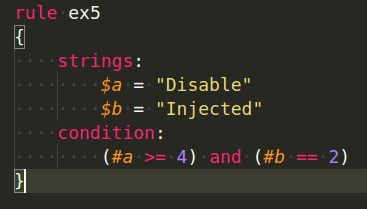 What if you don’t know where the string you’re looking for is located? What if you want to find a string within a range of bytes? This might also be done with the in operator:

Another example is searching based on file size:

If you’re going to run searches based on file sizes, bear in mind that you shouldn’t use this condition when scanning files in memory because the file in memory won’t be the same exact size as the file on disk, thus using the filesize directive on memory images is a terrible idea.

Before going on to expanding YARA rules using modules, I wanted to give one last example: searching for data at a given file offset or virtual address. This is dependent on whether you’re scanning a file or a process in memory.

Functions available for reading are:

Use uint16(0) to check for the 2-bytes at the beginning which are for the MZ signature, as seen in the example below:

YARA can be extended with the modules described below:

Although there are presently only nine modules available for use with YARA, this does not exclude you from creating your own and extending YARA with it.

In this article, we will only be covering the modules PE, Hash and Math. For others, please check the documentation found below.

First of all, in order to use a module in your rules, you need to import the module, as seen in the example below:

If you’re familiar with Python, you’ll see that it’s fairly similar, with the exception that double quotes are required.

Let’s start with the PE module, and our first example will be checking a file’s PE timestamp, which is found at offset 0xF0. Even though it is no longer accurate and most likely does not represent the time when the PE file was created/modified, it is still a useful example to display:

Next example, we are checking for a specific string at the Entry Point of the PE file:

What if you wanted to see how many sections there were? Very simple, as shown in the example below:

What if you wanted to check for a specific function being called from a DLL? Well check the example below then:

Check if the file is 32-bit or 64-bit using the machine type field as seen in the example:

In the example below we are checking in the version information of the PE file if it belongs to Mosse Security or not:

Let’s say you want to see if UPX was used to pack a section. As shown in the sample below, we can scan all of the sections:

The hash module extends YARA’s capabilities to be able to scan for files with a specific hash value. We can use this module to calculate hashes using MD5, SHA1, and SHA256.

The functions for calculating the hash use the following syntax:

They can now be used to generate hashes for strings in addition to calculating the hash value of a part of a file. The following is the syntax:

The same is true for sha1 and sha256, which take a string and return the hash value for it:

For example, you can use the same rule to look for MD5 and SHA1:

The Math module will be the final module discussed, and it can be used to extend YARA by computing values from specific sections of the file.

Remember to include the following module:

Calculating the entropy of a file or a partition of a file is one of the most prevalent uses of the math module. As previously stated, the entropy can help you determine how much unpredictability is included in a file.

Obfuscation is occasionally used as a signal.

Remember that the entropy range is 0 to 8. The closer to 8, the more randomness there is (higher entropy). The syntax is comparable to that of the hash module.

Could be used to calculate a portion as seen in the following code:

or used to calculate the entropy for a string:

In our example below, we are searching for files that have an entropy higher than 7.0:

There are other math functions that we recommend you check out. They could be found in the link

Try to figure out the purpose:

Below are some great articles written by Florian Roth that we recommend you read: