Stack is an area of memory within a process that is used to store data by the process itself. Unlike registers, which are modest in size but the fastest temporary data storage option, the stack provides more space. Stack is also used to track the program’s execution.

This is referred to as the return address since it is where the program will return after a function has completed.

Additionally, the stack expands toward lower addresses. Therefore, if the first piece put onto the stack has the address 0xbffffff8, it will fill the area betwee 0xbfffff8 and 0xbfffff5. The address of the next piece to be pushed into the stack is 0xbffffff4.

If no sophisticated countermeasures are in place, the stack is just another memory location that can be accessed and modified in the same manner as any other address.

A programming fault causes stack overflow, sometimes referred to as buffer overflow or stack-based buffer overflow. This may occur if the program handles user-supplied data insecurely.

In programming languages such as C and C++, it is necessary to declare the size of each variable you intend to use. This is necessary because the application must reserve specific quantities of memory during execution.

You can then freely utilize your variable, for instance by copying data from another location in memory to it/ Nonetheless, you may choose to save user-supplied input in your specified variable.

How can you know that the user will not provide more information than expected? What if this occurs?

Let’s use an exemplary C program in order to simulate a stack overflow scenario. We will use Ubuntu 14, 32-bit version.

For now, you just need to know that we will disable NX and ASLR in order to be able to conduct basic exploitation of a stack overflow.

Before compiling any susceptible code, let’s determine what must be done to enable exploitation. If you reboot your system during the exploitation, you will be required to disable ASLR after each reboot. Save the following commands for later if you like to complete the workouts alongside us.

This application is secure. Let’s start with the main() function and work our way down:

Let’s now think about the user’s input. What if we are allowed to write more than the declared variable’s size?

Let’s change some piece of code:

The characters must be entered manually into the program. However, manually entering hundreds of characters can be a laborious endeavor. Using output redirection, we can interact with the program’s stdin.

We are already aware that the buffer variable is 500 bytes in size. Additionally, we are permitted to send 700 bytes to it. Let’s capitalize on this fact. Also, let’s increase the core dump limit.

Core dumps are ELF files that are generated when a segmentation fault (memory corruption) occurs within a binary. Execute the following command in the same terminal window where the vulnerable program is running:

Upon sending 700 “A”s to the binary, we observe that it has crashed.

Due to multiple “A” characters being supplied to the program buffer, the stack was overflowed and the EIP register was populated.

We begin by launching the program in gdb and disassembling the main function. The call to the overflow() function is visible. 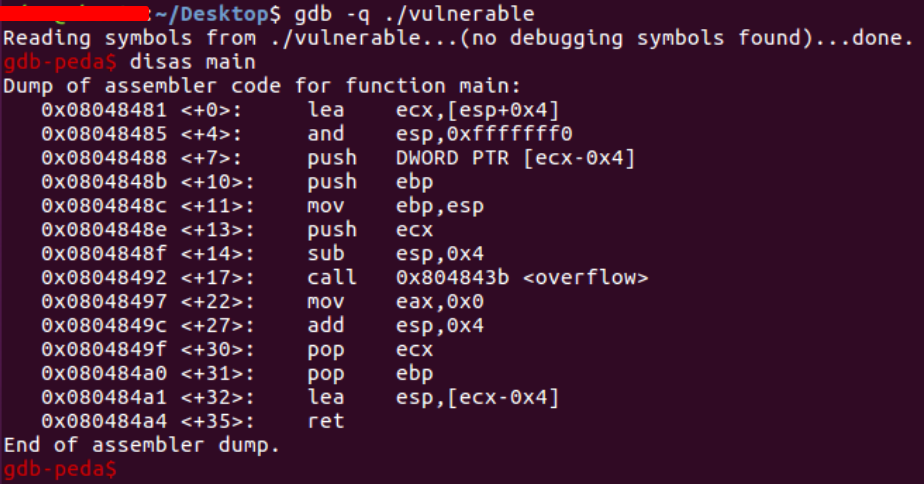 Then, let’s disassemble the overflow() function. We can see a few interesting points there: 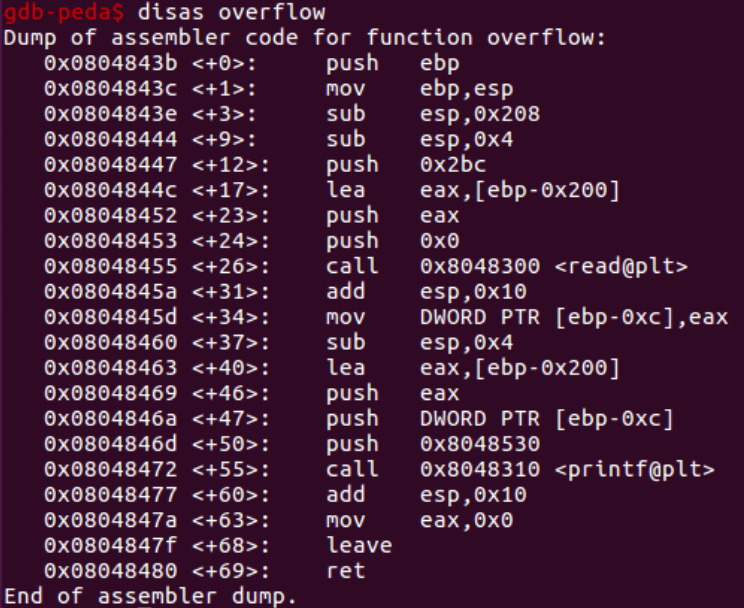 The buffer variable is pushed onto the stack prior to the read function call. This is accomplished by moving [ebp-0x200address ]’s to EAX (lea instruction) and then pushing it onto the stack as an argument to the read() function (push eax). The push 0x0 preceding the call to read() is the second argument and refers to the standard input. As these arguments are prepared, the read() function is invoked, and the user’s input is read into the memory location 0x200 bytes from the EBP.

We can set a breakpoint prior to and following the read() function. Additionally, we will need a breakpoint at the final instruction of the function, return.

The breakpoints are set in the following locations:

Now, we can execute the application. Python output redirection is still possible while in the debugger, but it must be accomplished in a different manner. We will save our target buffer to a file and then “feed” the “A” characters to the executable.

Immediately, the first breakpoint is hit. We can confirm where we are by examining the 5 instructions at the current eip, as follows:

As our variable was located in ebp-0x200, let’s obtain its address using the p command and then examine its current contents:

We see that nothing important resides there (no “A”s).

Let us continue (or c) and observe the second breakpoint being reached. Examining the variable now reveals that the read() function was successfully executed, as the letter “A” is now present:

Examining further, there are lots of “A”’s: 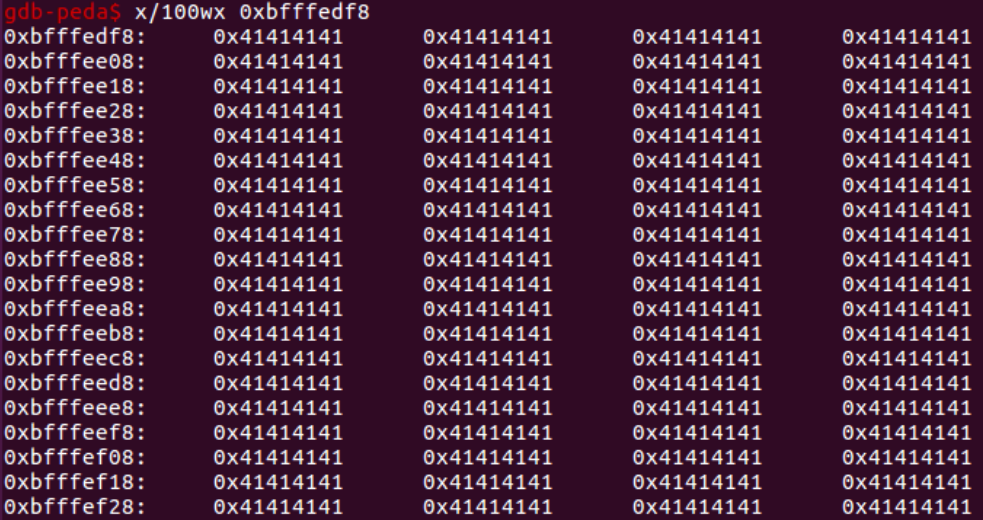 As the number of “A”s that were copied onto the stack exceeded the declared size of the variable, they needed to be placed. Normal program behavior dictates that they are copied further down the stack, displacing other data intended to reside there.

Initially, the saved return address (that is, the address of the instruction immediately following the call to overflow()) was restored. However, as the attacker saved the unexpectedly long input into memory, that location was overwritten (along with some space after it), so we have just AAAA (hex 0x41414141) there.

The program is attempting to resume execution at location 0x41414141. Such a location does not exist in the process’s memory, resulting in a segmentation fault:

As we now advance an instruction, a segmentation fault occurs because 0x41414141 has been placed in EIP. This is not a valid memory address, so the program has terminated:

By providing the program with sufficient amounts of lengthy data, we were able to influence the value of the EIP and, consequently, the address of the code to be executed.

If we could replace 0x41414141 with a real address, the program would begin executing the code located at that location.

We would like to know the exact size of the buffer required for the saved return address to begin to overflow. Then, we could precisely replace the EIP with our own controlled data. There are several ways to calculate the offset between the beginning of the buffer and the EIP.

Additionally, one of the PEDA utilities is pattern_create.

They both function in the same manner – producing a pattern of a unique string of a specified length.

During the crash, EIP is overwritten with some bytes belonging to this string.

We can instantly save the pattern to a file and feed it to the executable, as follows:

It is also possible to identify the correct offset to the EIP based on the EIP value.

Let’s use this value to build a new payload and execute the executable (we’re essentially trying to fill the EIP with “B”s):

Our computations were accurate. The B’s were used to overwrite the EIP. We can thus control the program’s execution flow:

In the next part we will abuse EIP control and run our own code.